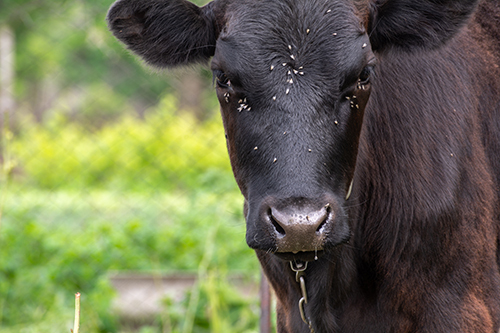 Much like the weather, fly populations can be a bit unpredictable during certain times of year. That’s often been the case with horn flies on pasture cattle, as populations have been known to rise after heavy rainfall events. This has created some mild concerns as producers question whether their feed-through fly control products are working effectively. To learn more, we sent our team to into the field to see the effect heavy rainfall has on Altosid® IGR.

After conducting a study on various regions throughout the country, our team of experts came back with the same conclusion: heavy rainfall events can lead to a brief spike in horn fly numbers among cattle being treated with Altosid® IGR, but all fly populations in the study returned to their normal levels of control within 1-2 weeks.

While this information alone can be comforting, we wanted to provide treatment tips to help producers plan for and address these population spikes. Following these recommendations can work as an insurance against rising fly populations after heavy rainfall events. Altosid® IGR delivers effective horn fly control that producers have relied upon for nearly 50 years. While heavy rainfall may produce a brief uptick in horn fly numbers, producers that weather the storm and continue feeding Altosid® IGR can help keep their cattle healthy and profitable all season long.

Sep 20,2021
Recovery time for horses will depend on the level of exercise, conditioning and the amount of muscle fatigue that has occurred. In many situations, a horse can be fully recovered within 24 to 48 hours.
Sep 14,2021
Next to oxygen, water is probably the most important nutrient for dairy cattle.  Research from the University of Illinois suggests water requirement of a high-producing dairy cow is greater than any other land-based creature due to milk being 87% water.
Sep 07,2021
Equine metabolic disorders, including Metabolic Syndrome, Insulin Resistance, Cushing’s Disease, and Polysaccharide Storage Myopathy, have been “hot topics” in equine nutrition for more than a decade. Horses suffering from these disorders require diets low in non-structural carbohydrates (NSC). The primary types of non-structural carbohydrates found in horse diets are sugars, found in forages and starches, and in grains. For most metabolic horses, the diet should contain an NSC level of 10 percent or less.