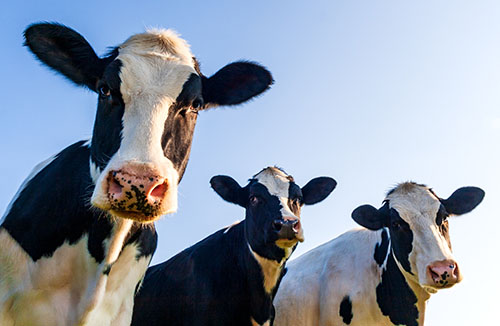 While feed costs for the lactating cows represent the largest outlay for a dairy operation, producing heifers is responsible for the second-largest expenditure. Since the heifer is the future of the herd, managing growth and ultimately age at first calving is significant to the profitability of the operation.

Economic evidence suggests that heifers should calve between 22 – 24 months of age. Heifers typically require at least five percent additional costs per month when calving occurs later than 24 months of age. It’s well known that earlier-calving heifers have increased milk yield, improved conception rate, and improved fertility compared to later herd mates, and they remain in the herd longer. To realize these benefits, heifers must perform and reach proper stature and condition.

Researchers recommend two growth benchmarks — heifers should be 55- to 60-percent of mature bodyweight (BW) at breeding and 75- to 85-percent of mature BW post-calving (90- to 95-percent at calving). To help determine mature BW, evaluate the BW of third calf cows to aid in determining desired growth rate of the heifer program. Below are some guidelines to achieve proper stature and BW for heifers.

• At birth, it’s critical to provide passive immunity to the newborn in the form of high-quality colostrum (both immunoglobulin content and cleanliness). Colostrum should be given as soon as possible, preferably within three hours after birth. Colostrum should be fed at the rate of 15-percent of BW — approximately four quarts for Holsteins — along with a second feeding of at least two quarts given 12 hours after birth. Remember, intestinal absorption of immunoglobulins from colostrum decreases rapidly; there is less than 50-percent absorption nine hours after birth. If colostrum cannot be administered until 24 hours after birth, the calf will be unable to obtain effective passive immunity, likely resulting in poor performance, higher rearing costs, and possibly even death.

• Calves are expected to at least double BW before weaning. To achieve this BW by six weeks of age, calves should average no less than two pounds per day.

• Stature (skeletal and muscular) should represent the majority of weight gain with little fat gain.

• A critical portion of your heifer program is early development of the digestive system to allow for transition from liquid to solid diet.

• Offering forage during the milk phase is counterproductive as rumen development is restricted.

• Only high-quality milk replacer should be offered. Pasteurized whole or waste milk is equally effective if a milk balancer supplement is added.

• For weaning to occur, the calf is required to consume two to three pounds of starter per day for three consecutive days to maintain the desired growth rate after secession of milk feeding.

• From three to nine months of age, secretory tissue and overall mammary gland development will occur more rapidly than other organs. If excess energy without proper protein is offered, superfluous fat will be deposited which will disrupt later milk production.

• Evaluate heifers at one year of age to determine whether proper size can be achieved for breeding. Typically, 850 pounds for Holsteins is desired, and approximately 650 pounds for Jerseys.

• Always offer a completely balanced ration to maintain the desired rate of gain until calving. Remember, older animals will deposit more fat than protein, making it fundamental to monitor rations. Your Co-op Feed & Animal Health Specialists can assist with any implementation of heifer programs that will fit your operation.

Jan 24,2022
Over the last decade, the approach to deworming animals in animal agriculture has shifted from a time interval schedule to a strategic approach.   For many years, animals were dewormed every three months, every six months, etc.
Jan 13,2022
Animal health often declines in the winter months. This often leads to an increase in the usage of antibiotics in our animals.   There are a few important things to remember when deciding how to use antibiotics.
Jan 10,2022
For the most part, specific nutritional requirements of deer (cervids} are not well defined. It is known, however, that benefit is seen by increasing wild deer nutrition, particularly after the first frost, for improvement of body stores for winter & increased survival (Note that attempting to maintain body condition will take precedent over antler growth during energy partitioning).