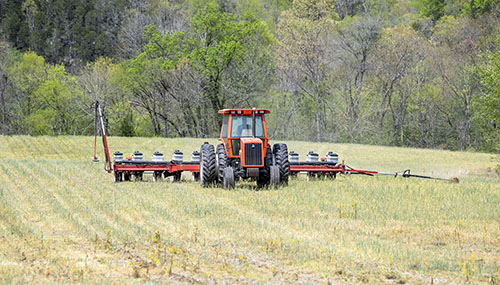 For many farmers, spring and summer means time in the tractor cab and in the fields. Although they were generally a little later getting in the field this year due to a rainy early spring, producers remain hopeful for a good 2021 fall harvest.

Those following the hashtag "#Plant21" on social media have been keeping up with the season's progress on a regular basis. Some of that information is being shared here, along with additional insight from GreenPoint Ag agronomists and Co-op personnel and customers.

In Newport, Smoky Mountain Farmers Co-op member Robbie Ottinger says he is “relieved” to have his corn seeds in the ground and growing.
“I’m pretty excited about getting started planting,” says Ottinger. “So far, everything has been going good.”

Ottinger is partnered in his operation with his father, Robert, and the pair currently grow 950 combined acres of wheat, soybeans, grain corn, and hay, and raise 50 head of beef cattle annually. Because of the variety in their production, they find themselves visiting the Co-op regularly to pick up supplies.

“We pretty much count on everything for the growing season to come from them,” says Ottinger, who represents the fourth generation on Ottinger Farms.

“The Co-op spreads our fertilizer, and we purchase all of our seed and chemicals there as well. We need a lot of chemicals because I usually spray soybeans at least four times a year.” White Bluff row crop producer Jed Corlew says the Middle Tennessee weather is “beginning to cooperate.”

“So far, so good,” says the 30-year-member of United Farm and Home Co-op in Dickson.

“The first week of May has been kind of dry — which has been good — so I believe we’re off to a positive start.” Corlew is expecting to get 600 acres of corn and beans in the ground this season with the help of United Farm and Home Co-op. “I buy probably 90 percent of my inputs through Co-op,” says Corlew. “I also always find myself calling on their agronomist, and anytime I’ve got a question, they’re always there to help.”

In West Tennessee, row crop producer Mark Spradlin — who farms in Madison, Henderson, Chester, and Hardiman counties — say he counts on First Farmers Co-op to deliver everything he needs directly to his operation.

“With the support of the Co-op, we have worked to become stronger and more profitable over the years,” says Spradlin. “We’re somewhere between a 4,000- and 5,000-acre operation that spans over four counties. Right now, our team is made up of myself, my wife, two full time employees, and a couple of parttime folks who help make our operation run efficiently.”

Spradlin adds that First Farmers Co-op is “almost like another helper for me.”

“They help look after things, give advice, take soil samples, and help me understand the results,” Spradlin says. “Sometimes, it feels like we have an extra set of legs and eyes on our crop throughout the year.”

Ben Gilbert, GreenPoint Ag Member Service Representative (GAMSR) in East Tennessee, reports that the dry conditions of late April and early May have proven to be favorable to planting corn and soybeans.

“In southern East Tennessee, corn is over 70 percent planted,” Gilbert says. “In the northern areas, only about 40 percent is planted, and beans are just getting started.”

Cole Delong, Brett Jones, and Trevor Smith who are all GAMSR, say that in the middle of the state, corn planting is varied, but around 75 percent of the crop was in by the first of May and soybean plant prep had begun. West Tennessee saw closer to 90 percent of the corn crop in the ground by May 1, along with approximately 25 percent and 10 percent of soybeans and cotton, respectively.

Hay production in East Tennessee has “had a few hiccups this year,” Gilbert reports, where the Upper Cumberland and lower Middle Tennessee areas were in good shape during the first of May.

“Hay harvest will start mid-May but is currently short due to a cold spell in midApril,” says Gilbert. “We have seen some alfalfa weevils earlier than normal and in higher populations, so that will need to be addressed.”

Throughout the entire planting season and in every region of the state, Co-op and Green Point Ag Member Services Representatives are in the fields, ready to answer questions and help farmers. For more information, contact your local Co-op or GreenPoint Ag location.

We want to see your story! Share your #Plant21 story with us on social media using #Plant21 or tagging Tennessee Farmers Cooperative to your posts.

Jan 03,2023
The best practices of growing high-quality and high-yielding grain crops often command the most attention in farm magazines and at agricultural field days, and that comes as no surprise; you must produce the crop before anything else happens. But growing crops is only part of the equation in making a profit. Your harvest must be available and in condition when the markets are high, or else the hard work of producing it becomes all for naught.
Dec 13,2022
While fertilizer prices have trended lower in recent months, they remain historically high and a cause for concern as growers close the books on the 2022 crop year.
Oct 04,2022
Variety selection critical for next year’s harvest